Grapefruit is a juicy fruit that comes in red, pink and white colors. Having a bit sour 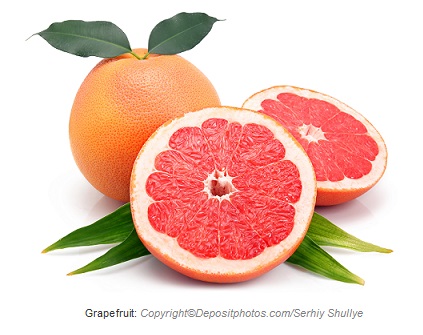 taste, grapefruit is the most famous fruit in fitness world because of its ability to increase muscle mass and drop body fat. A medium grapefruit weighs about 260 grams and provides 25 grams of carbohydrates, 2 grams of protein and 3 grams of fiber.

Average calories: 108 per one medium.

Phytonutrients found in higher amounts and their health benefits: red and pink grapefruits contain lycopene, a carotenoid that fights free radicals and has a protective effect against prostate cancer. Grapefruit also has the phytonutrients liminoids and glucarates, which have anti-cancer activities.

Grapefruit has a small amount of HMB (beta-Hydroxy beta-Methyl Butyric acid). It is the end product of metabolism of BCAA (Branched Chain Amino Acids) and can increase muscle mass, prevent from muscle wasting in chronic diseases, and reduce body fat. Grapefruit diet has gotten its fame from HMB. Fore more information about HMB, See "HMB" under the section of "Sports - Performance Enhancers".

Grapefruit contains naringenin. It is a flavonoid that has been claimed to help repair damaged DNA in prostate cancer cells, and might help reduce nerve damage (neuropathy) in people with diabetes. Naringenin also inhibits a drug metabolizing enzyme in the intestine and liver named cytochrome P450.

Another phytonutrient is spermidine, which is claimed to increase life span.